We’ll firstly recap the components of time series and then discuss the moving average concept. After that we’ll focus on two time series decompositions – a simple method based on moving averages and the local regression method.
You can download the data files for this tutorial here

Alternatively, in a multiplication model, we assume that Yt is the multiplication of different components Tt, St and Rt. When the magnitude of seasonal fluctuations or the variation around a trend cycle does not vary with the level of time series, the additive model is more appropriate than the multiplicative model.

For seasonal data, the length equals the number of observations in a season, 12 for monthly data, 4 for quarterly data, etc.

To find the trend, we obtain moving averages covering one season. We then eliminate the trend component from the original time series by calculating Yt minus Tt, where Tt is the trend value. Thirdly, to estimate the seasonal component for a given time period, we average the de-trended values for that time period. We then adjust these seasonal indexes to ensure that they add to zero. The remainder component is calculated by subtracting the estimated seasonal and trend-cycle components.

Let’s consider an example. Suppose we have monthly time series data for three years 2014, 2015 and 2016. First, calculate the moving average. We consider 13 values for capturing the trend in the yearly data – that is – we consider the previous 6 months, the following 6 months, and the current month to calculate moving average for the current month. This gives us the trend component. After doing that, we remove the trend component Tt from the original time series Yt. Finally, the seasonal index for July is the average of all the de-trended July values in the data, that is the average de-trended for July 2014, July 2015 and July 2016. Note that this moving averages approach is slightly different from what we discussed earlier as it uses pre and post-data values for a given period moving average.

Case Study
Let’s consider a case study of monthly sales data for three years from 2013 to 2015. The objective of the study is to apply decomposition methods and analyse each component of the time series separately. We have 36 records with year, month, and sales as the variables of the study. 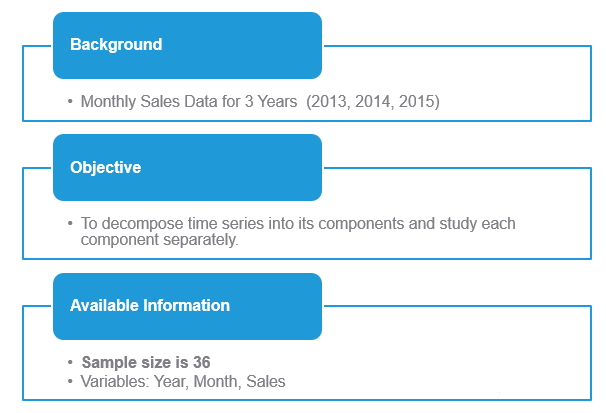 Data Snapshot
Here is a snapshot of the data. We have three columns representing three variables Year and Month are time variables, whereas Sales is our time series of interest. 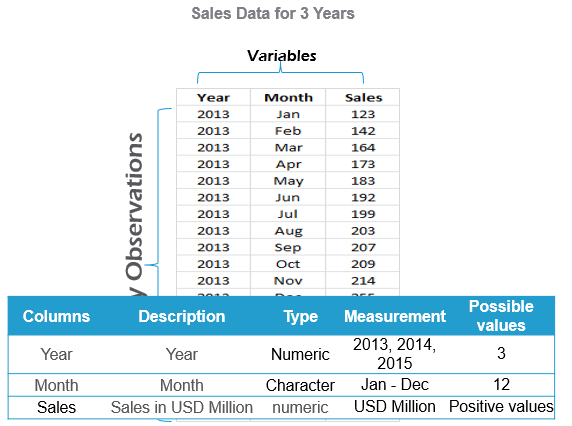 Time Series Decomposition in R – Simple Method
First import our data using the read.csv function. As discussed in the previous tutorial, we’ll use the ‘ts’ function in R to convert a variable from a data frame to a time series object. We specify the x-axis scale, that is the year and month in our data, as the start and end argument. frequency=12 tells R that we have monthly data. Once we set our data frame to a time series object, we perform a classical seasonal decomposition through moving average by using the decompose function. We then plot the decomposed data using the plot function in R.
# Time Series Decomposition
salesdata<-read.csv("Sales Data for 3 Years.csv",header=TRUE)
salesseries<-ts(salesdata$Sales,start=c(2013,1), end=c(2015,12), frequency=12)
ts() converts a column from a data frame to a simple time series object.
start= and end= arguments specify the x-axis scale. (Year and month in this case).
frequency=12 tells that we have monthly data
decomp<-decompose(salesseries)
plot(decomp)
decompose() performs classical seasonal decomposition through moving averages.
plot() of decompose object gives a 4-level visual representation

R uses the default additive time series model to decompose the data. To use the multiplicative model, we specify type equals to multiplicative in the decompose function. We don’t calculate the trend with the first and last few values. The seasonal component repeats from year to year. 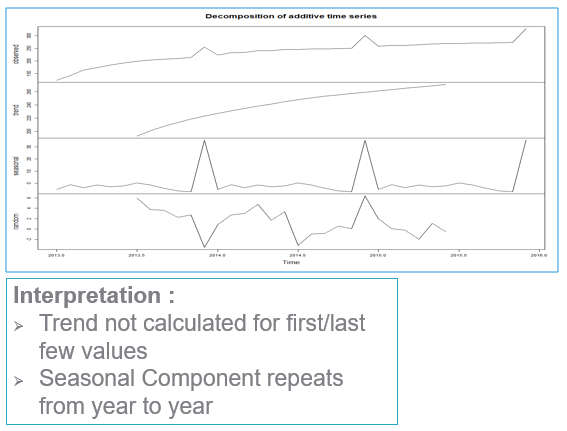 We can view each component of the time series separately by using the object name and the ($) operator. Since the trend has not been estimated for the first and last values, we can see na’s in the output. This will be reflected in the random component as well.

#Analysing the decompose() object. Each component can be separately viewed by using the $ operator. 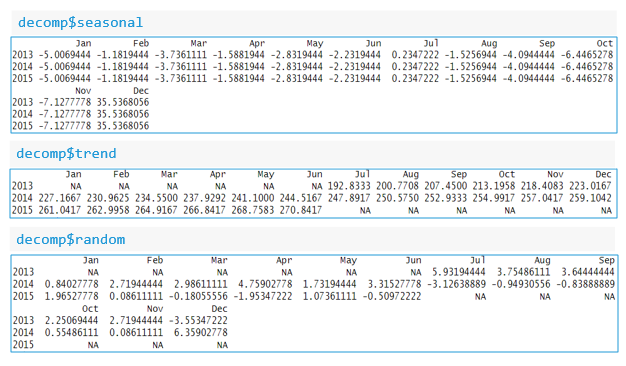 By subtracting the seasonal component from the original time series we can obtain a seasonally adjusted time series as shown in this plot here. 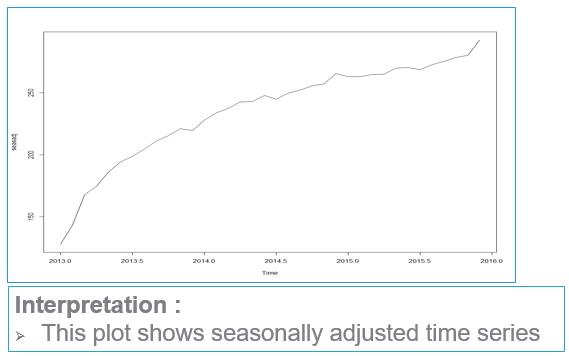 Let's now look at the second technique of time series decomposition called the local regression method abbreviated as LOESS. This is a non-parametric generalisation of ordinary least squares regression. The fitting technique does not require a prior specification of the relationship between the dependent and independent variables. The seasonal and trend decomposition using the LOESS method abbreviated as STL works by iterating through the smoothing of the seasonal and trend components. STL is a procedure for regular time series, so that the design points of the smoothing operation are equally spaced.

Time Series Decomposition in R – LOESS Method
In R, the stl function is used to carry out decomposition by LOESS method. The s.window specifies the seasonal window by using either a character string ‘periodic’ or the span (in lags) of the LOESS window for the seasonal extraction. The t.window specifies the trend window for trend extraction, which should be odd number or kept as the default. Here, we have not specified t.window so R will use the default value. We will extract the seasonal window of the data by specifying s.window equals to periodic and then plot this decomposed time series using the plot function.

The data shows the trend and seasonality components of the time series. The trend values are estimated for all periods.
# Output 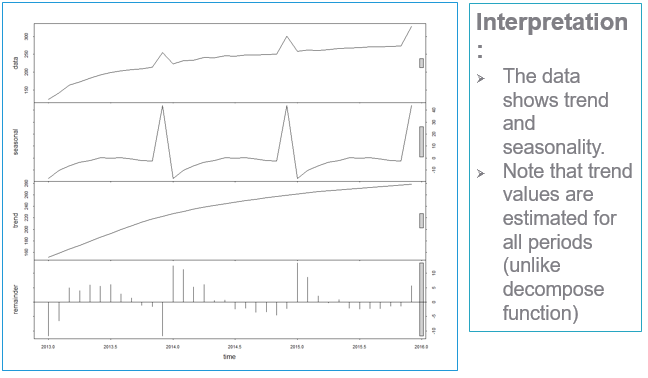 Quick Recap
Here is a quick recap what we have covered - we learnt how to decompose a time series using the simple and the LOESS method. The loess method is used for estimating non-linear relationships. The decompose function carries out simple seasonal decomposition whereas the stl function is used for doing the LOESS decomposition.