Firstly, we’ll recap our earlier case study and then develop a binary logistic regression model in R followed by an explanation of model sensitivity and specificity, and understand how to estimate these. You can download the data files for this tutorial here.

Binary Logistic Regression Data Snapshot
Let’s consider the example of a loan disbursement. Here’s a snapshot of the data. A bank wants to develop a model which predicts defaulters in order to help its loan disbursal decision making. The dependent variable is the status observed after the loan is disbursed, which will be 1 if a customer is a defaulter, and 0 otherwise. The variables – age group, years at current address, years at current employer, debt to income ratio, credit card debts and other debts are our independent variables. 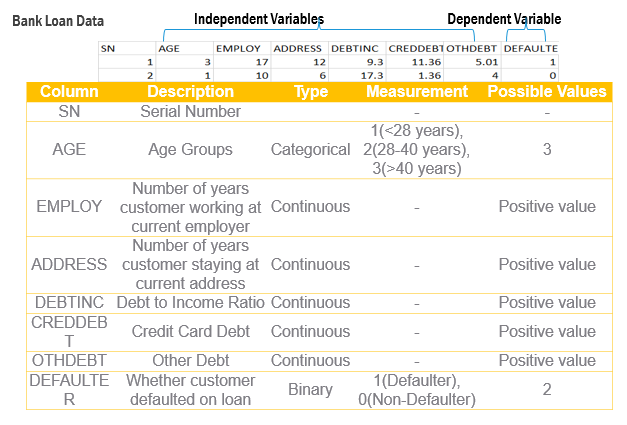 Import the data and check the data structure before running the model
data<-read.csv("BANK LOAN.csv",header=TRUE)
str(data)

Individual Hypothesis Testing in R
Which independent variables have an impact on the customer turning into a defaulter?
After fitting the logistic regression model, we can carry out individual hypothesis testing to identify significant variables. We simply use the summary function on the model object and then get detailed output. Variables whose P value is less than 0.05 are considered to be statistically significant. Since the p-value is < 0.05 for Employ, Address, Debtinc, and Creddebt, these independent variables are significant. 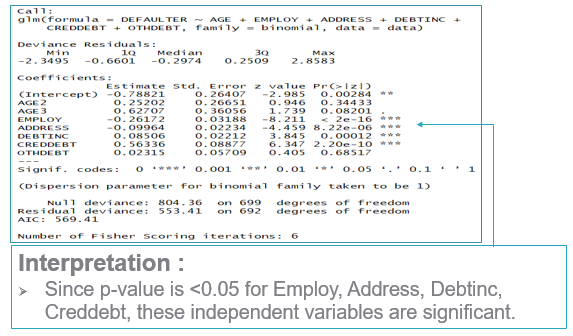 Individual Testing in R
Once we obtain our coefficients, we check them for their signs based on business logic. If the coefficient sign does not match with the business logic, then that variable should be reconsidered for inclusion in the model.

Re-run Model in R
Next, we re-run the binary logistic regression model by including only significant variables. The output of the summary function provides revised estimates of the model parameters.
riskmodel<-glm(DEFAULTER~EMPLOY+ADDRESS+DEBTINC+CREDDEBT,
family=binomial,data=data)
summary(riskmodel)
In this output, all independent variables are statistically significant and the signs are logical. This model can therefore be used for further diagnostics. 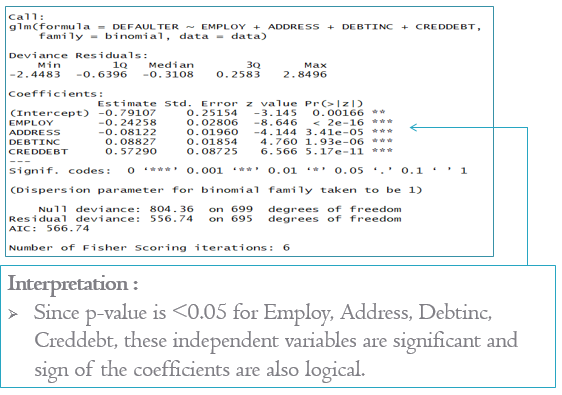 Final Model
This is the final model after substituting the values of parameter estimates. The probability of defaulting can be predicted when the values of the X variables are entered into this equation. 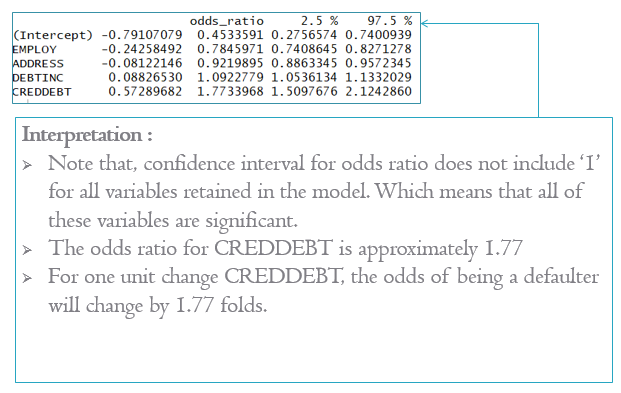 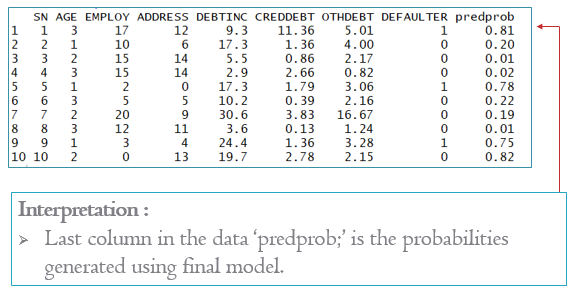 Classification Table
It is important to measure the goodness of fit of any fitted model. Based on some cut off value of probability, the dependent variable Y is estimated to be either one or zero. A cross tabulation of observed values of Y and the predicted values of Y is known as a classification table. Since this classification table varies with the cut off value, it is not considered to be a good measure of goodness of fit unless an optimum cut-off is obtained.

Classification Table Terminology
Different terminologies are used for observations in the classification table. They are sensitivity, specificity, false positive rate and false negative rate. The sensitivity of a model is the percentage of correctly predicted occurrences or events. It is the probability that the predicted value of Y is one, given the observed value of Y being one. 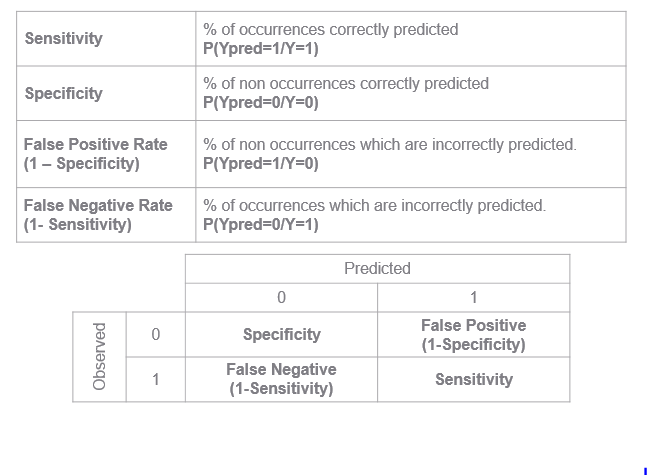 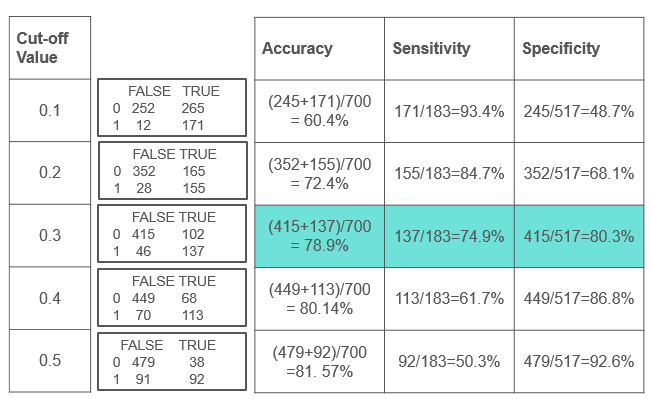 Quick Recap
In this tutorial, we explained how to perform binary logistic regression in R. Model performance is assessed using sensitivity and specificity values. Sensitivity is the percentage of events correctly predicted, whereas specificity is the percentage of non-events correctly predicted.
DATA SCIENCE INSTITUTE
PROFESSIONAL CREDENTIALS
DATA SCIENCE COURSES
RESOURCES