In this tutorial we’ll learn about binary logistic regression and its application to real life data. Without any doubt, Binary Logistic Regression remains the most widely used predictive modelling method.

Firstly, let's discuss what binary logistic regression is and its applications in different sectors. We’ll then focus on statistical models and hypothesis testing and finally we will use a case study from the banking domain to strengthen our understanding. 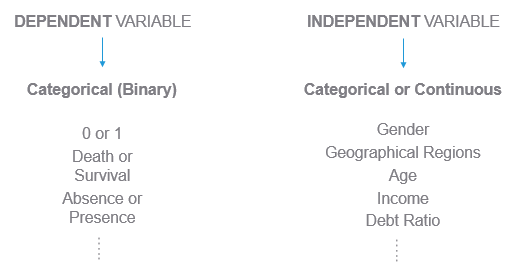 Binary logistic regression models are used across many domains and sectors. For example, it can be used in marketing analytics to identify potential buyers of a product, in human resources management to identify employees who are likely to leave a company, in risk management to predict loan defaulters, or in insurance, where the objective is to predict policy lapse. All of these objectives are based on information such as age, gender, occupation, premium amount, purchase frequency, and so on. In all these objectives, the dependent variable is binary, whereas independent variables are categorical or continuous. 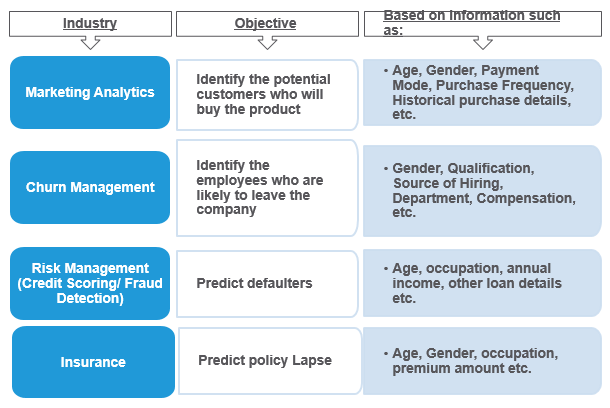 Linear regression is suitable for predicting a continuous value such as the price of property based on area in square feet. In such a case the regression line is a straight line. Logistic regression on the other hand is used for classification problems, which predict a probability that a dependent variable Y takes a value of 1, given the values of predictors. In binary logistic regression, the regression curve is a sigmoid curve.

Statistical Model for Binary Logistic Regression
The equation below is a statistical model for binary logistic regression with a single predictor. The small p is the probability that the dependent variable ‘Y’ will take the value 1, given the value of ‘X’, where X is the independent variable. The natural log of “p divided by one minus p” is called the logit or link function. The right-hand side is a linear function of X, very much similar to a linear regression model. 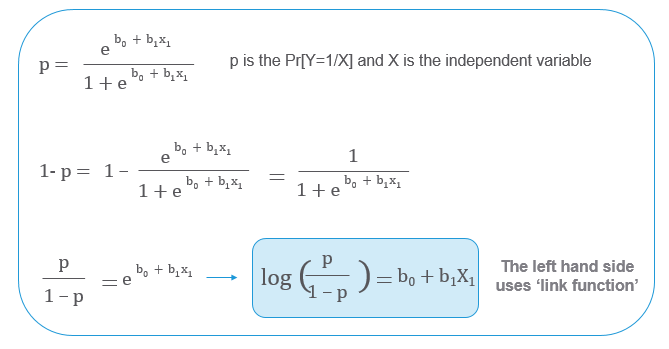 The general logistic regression model for a single predictor can be extended to a model with k predictors and is represented as given here. In this equation, p is the probability that Y equals one given X, where Y is the dependent variable and X’s are independent variables. B0 to bk are the parameters of the model, they are estimated using the maximum likelihood method, which we’ll discuss shortly. The left-hand side of the equation ranges between minus infinity to plus infinity.

Note that LHS of the model can lie between – ∞ to ∞

Binary Logistic Regression Case Study
Let’s now look at the concept of binary logistic regression using a banking case study. We have a bank that has the demographic and transactional data of its loan customers. The bank wants to develop a model that predicts defaulters and can help the bank in loan disbursal decision making. The objective here is to predict whether customers applying for a loan will default or not. We use a sample of size 700 to develop the model. The independent variables are age group, years at current address, years at current employer, debt to income ratio, credit card debts and other debts. All of these variables are collected at the time of the loan application process and will be used as independent variables. The dependent variable is the status observed after the loan is disbursed, which will be 1 if it is a defaulter, and 0 if not. 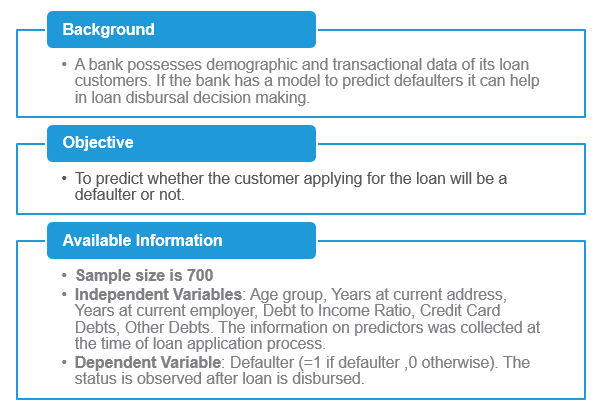 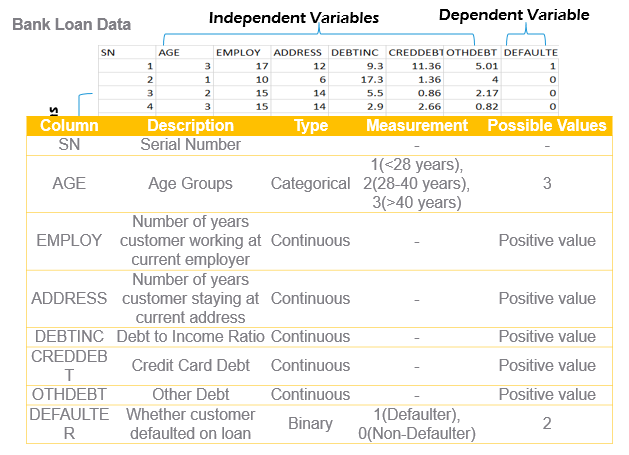 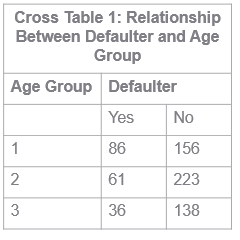 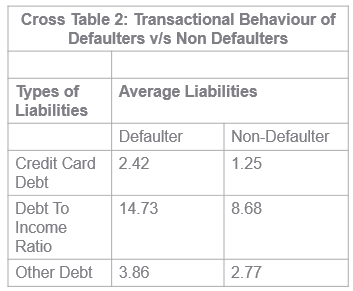 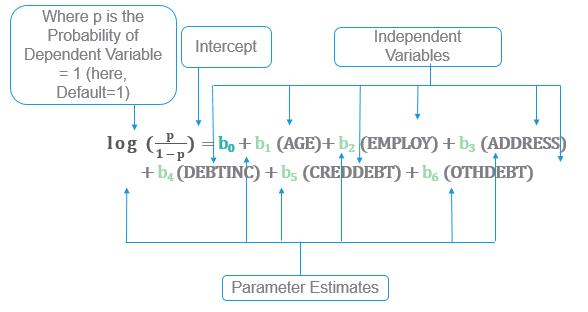 As mentioned before, the parameters of the logistic regression model are estimated using maximum likelihood estimation. The likelihood function is a joint probability of Y1, Y2….up to Yn. The parameters are estimated by maximising the likelihood function, L. Two commonly used iterative algorithms are the Fisher scoring method and the Newton-Raphson method. Both of these algorithms give the same parameter estimates with a slight difference in the estimated covariance matrix. From an application point of view, we don’t need to worry about complex mathematics. The algorithm is available as a built-in function in R and Python.

The table here gives all parameter estimates that can be used to write the model equation. The model equation can be used to estimate probability of default by substituting values of specific customer characteristics. Note that AGE is a categorical variable with 3 categories and hence two coefficient values are shown for two dummy variables. 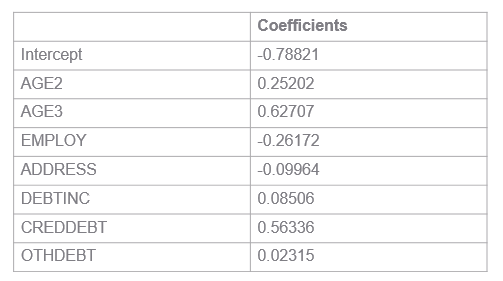 The logit link or logit function is also known as the log of odds, where odds is the probability of success divided by the probability of failure. The estimated parameter gives the change in log of odds given one unit change in the independent variable. For example, the estimated coefficient of employ (that is number of years customer is working at current employer) is -0.26172. This means that one unit change in employ will result in a change of -0.26712 in log of odds. The negative sign implies that a customer with a steady job is less likely to be a loan defaulter. We usually interpret the odds ratio rather than regression coefficients for a logistic regression model. The odds ratio gives a measure of association between the dependent and independent variable. 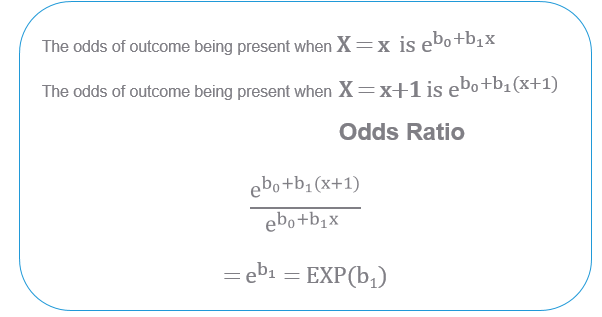 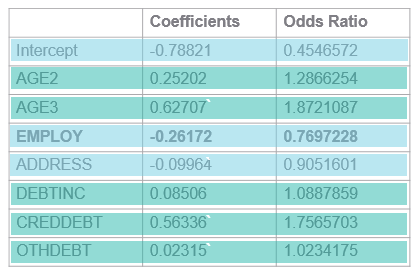