Multiple Linear Regression (MLR) is the backbone of both predictive modelling and machine learning and an in-depth knowledge of MLR is critical to understanding these key areas of data science. This tutorial provides an initial introduction to MLR using R.

The parameter b0 is termed the regression intercept in the model.

So how do we get the values of these unknown parameters using known values of Y and X variables?
To do this, we use the least square method. This method minimises the error sum of squares in the data to fit the optimum model. Software gives least square estimates as the main output of the regression model.

Multiple Linear Regression Case Study
Let’s illustrate these concepts using a case study. The objective is to model a job performance Index based on the various test scores of newly recruited employees. Our dependent variable is Job Performance Index, and our independent variables are aptitude, test of language, technical knowledge, and general information. 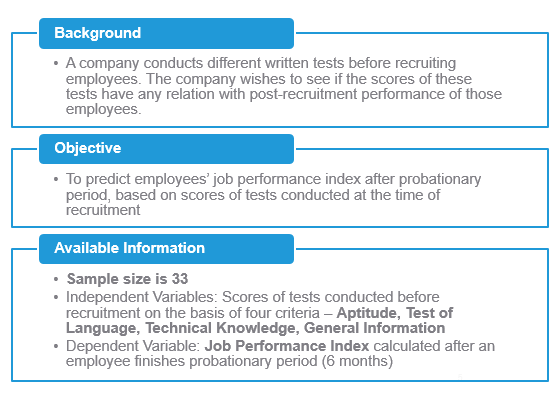 Here’s a snapshot of the data with our dependent and independent variables. All variables are numeric in nature and obviously the employee ID is not used as a model variable. 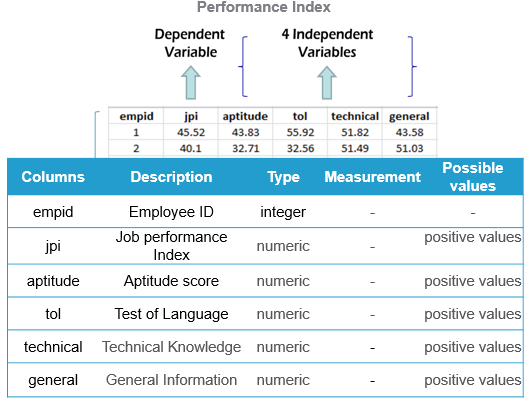 It’s always advisable to have a graphical representation of the data, such as scatter plots, which give us insights into the variables’ bivariate relationships.
We import our example data using the read.csv function in R and use the GGally library and the ggpairs function to present our data graphically, specifically to create scatterplots for our variables of interest.
Importing the Data
perindex<-read.csv("Performance Index.csv",header=TRUE)
Graphical Representation of the Data
library(GGally)
ggpairs(perindex[,c("jpi","aptitude","tol","technical","general")],
title="Scatter Plot Matrix",
columnLabels=c("jpi","aptitude","tol","technical","general"))
The ggpairs function in the GGally library helps to visualise the bivariate relationships between two variables, as well as quantify them in the form of correlation coefficients, while also giving the distribution for each variable. We observe that the job proficiency index has a high correlation with technical knowledge and general information scores. 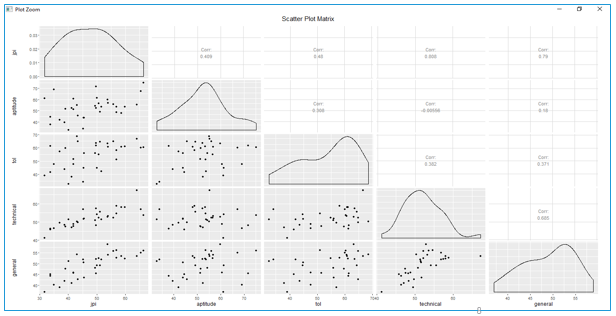 Multiple linear regression can answer many questions such as: 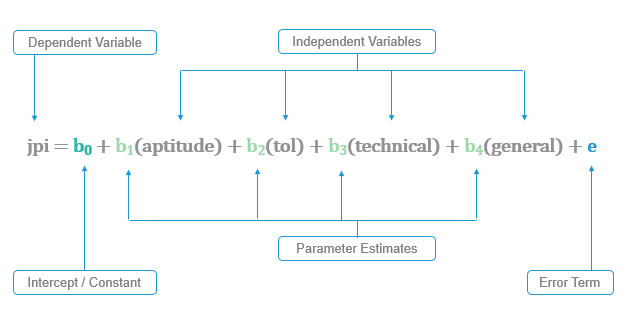 Parameters are estimated using the least square method as discussed previously and here are five parameter estimates – one for each independent variable and a constant term B0. We now have a model equation wholly defined in terms of variables and estimated parameters.

Model Output
The table shows the output of the MLR model as displayed in R. Coefficients are the model parameter estimates, and the sign of each parameter represents its relationship with the dependent variable.

Let’s see how to interpret these partial regression coefficients. In general, we say that for every unit increase in the independent variable (X), the expected value of the dependent variable will change by the corresponding parameter estimate (b), keeping all other variables constant. For example, the parameter estimate for aptitude test is observed to be 0.32. Therefore, we infer that for one unit increase in aptitude score, the expected value of the job performance index will increase by 0.32 units.

Here’s a recap of the main concepts covered in this tutorial. First, we learned how to understand our data and ensure consistency in the dataset. We then covered how to represent our data graphically by using the ggpairs function. Lastly, we learned how to fit a multiple linear regression model in R and interpret its coefficients. 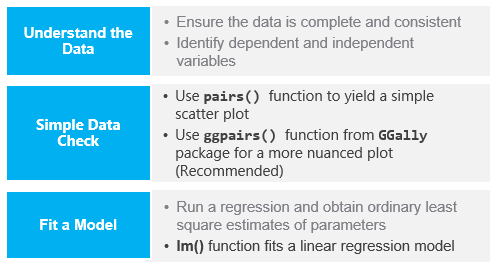